Home > Industry News > PBAT price in China continues to rise due to the explosive price increase of its main raw material: BDO 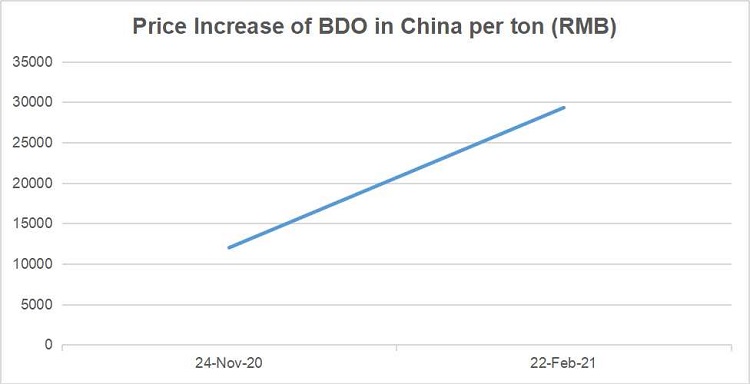 In fact, the domestic BDO market bottomed out and rebounded in the second half of 2020, and the rising trend continued to the last ten days of November 2020. Starting after the new year of 2021, the price of BDOis rising into the top three of the chemical sector.

Comprehensive analysis shows that there are several major reasons for the price rise of BDO, such as supply reduction, transportation restriction, manufacturers' strong desire to sell, high quotation, booming PBAT market in the industry, sharp increase in demand, and bullish position filling in the downstream. The quotation of manufacturers continues to rise, the market follow-up sentiment is high, and the BDO market continues to rise in a short period of time.

1. Part of the plants for BDO are still in shut down and the supply is reduced

According to the rough estimation of the Institute of biodegradable materials, the current domestic BDO production capacity is about 2.4 million tons, and the actual output is about 1.6 million tons.

From January to February 2021, in addition to Xinjiang Tianye's 30000 ton unit still in operation, many units were shut down for maintenance or replacement. In addition, in January, some areas in China were affected by COVID-19 and so on. Logistics and transportation were limited and freight increased, resulting in slow delivery of orders.

2. The BDO manufacturers are reluctant to sell, so the price offer tend to be high

Some enterprises that produce BDO are integrated enterprises, and their own inventory is digested by themselves, forming a complete industrial chain. For example, Xinjiang Blue Ridge Tunhe (the largest PBAT producer in China) has a production capacity of 238000 tons of BDO, part of which is used for its own PBT, PBS / PBAT and PTMEG production.

3. The demand of the downstream industries are increased and stock up

At the same time, the downstream industry PBAT industry increased dramatically, driven by the National Plastic restriction policy in China, resulting in a surge in demand, thus increasing the digestion capacity of raw materials. According to the statistics of the Institute of biodegradable materials, about 340000 tons of PBAT capacity will be put into operation in 2021, and the total domestic capacity will reach 667000 tons. According to the calculation of 0.55 tons of unit consumption, the consumption of BDO by PBAT in 2021 is expected to increase by 100000 tons + (only rough estimate).

4. The mentality of “Running after Rising and Falling”