During the first half of 2011-2014, the price of BDO industry was at the peak, and the annual price was above RMB 13500 / ton, especially in 2011 when the price was as high as RMB 25000 / ton. The main reason is that the domestic device load was low due to factors such as poor start-up of new devices, shutdown and maintenance, raw material supply, catalyst and device failure, which made the BDO supply continue to be tight, and the market price rose accordingly. 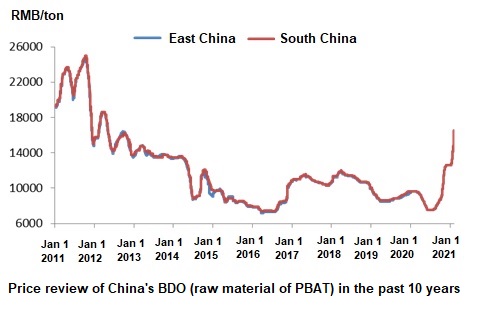 After the second half of 2014, with the continuous expansion of domestic BDO capacity, the capacity expansion speed of downstream industries was slower than that of raw materials, and the demand was low; however, BDO capacity was in a state of excess, and factories gradually went to fight a "price war" to compete for market share. In most years, the price fell below 10000 yuan / ton, once to 7200 yuan / ton (from the end of March to the beginning of April 2016).

In 2017-2018, BDO prices rose to more than 10000 yuan due to limited transportation, short-term tight supply and slight increase in downstream, but the annual fluctuation was not large.

In the first half of 2019, due to the impact of safety inspection and trade friction, the downstream construction started to decrease, the demand decreased, and the price dropped significantly. In the second half of the year, due to routine maintenance or sudden shutdown of the plant, the overall start-up was low, and the spot supply was tight; meanwhile, in November, the domestic BDO industry carried out reform to implement linked settlement. In November and December, as an important transitional period, the factory was determined to support the market, and the market rose substantially.

In the first half of 2020, due to the spread of the epidemic, the accumulation of factories and other negative factors, the price will drop sharply. In the second half of the year, some domestic plants were shut down for a long time or the burden was reduced, and the inventory of each factory was low; while the demand of downstream industries recovered, and the consumption showed a certain explosive growth, which led to the shortage of BDO spot and the price skyrocketed, reaching a new high since 2014.