Depending upon the application, food grade phosphates may function as buffers, sequestrants, acidulants, bases, flavors, cryoprotectants, gel accelerants, dispersants, nutrients, precipitants, and as free‐flow or ion‐exchange agents. Food‐grade phosphates have been reviewed extensively and in more detail on their properties and uses. The uses and functions of food‐grade phosphates will be briefly described by food commodity here.

The major food uses of food‐grade phosphates include:

2. maintaining the structure and hydration of meat, poultry, and seafood products (muscle foods);

3. use as a protein dispersant in evaporated and spray‐dried milk products; use for either flavor or added minerals in beverages;

4. and maintaining the natural structure of some canned fruit and vegetable products. 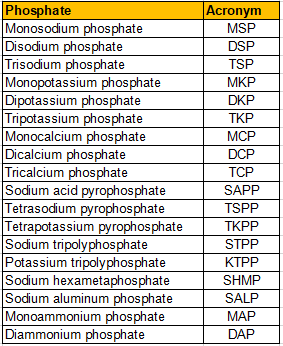 Sodium phosphates are used in some seafood products where certain functions are similar to those used for meat products while others are highly specific to seafood biochemistry.

The major use of phosphates in cereal and grain products is the chemical leavening of cakes, cookies, muffins, doughnuts, crackers, biscuits, battered and breaded foods, pancakes, and waffles.

Phosphates are used in dairy applications for protein dispersion, to buffer, for ion exchange, acidification, gelation promotion, nutrient supplementation, and sequestrants. Many such applications are driven by customer desires.

For example, TSPP may be added to chocolate milk to modestly increase viscosity and to maintain dispersion of the cocoa powder. Buttermilk produced by either direct acidification by phosphoric acid or bacterial culture has the casein suspended in acidic whey that, in time, naturally tends to whey‐off or form a protein flocculant and an upper layer of whey. TSPP is added to disperse or deflocculate the protein to yield a homogenous product.

Further, DSP may be added to milk before drying in order to enhance rehydration and protein dispersion of the nonfat dry milk. TSPP promotes gelation, and DSP and MCP accelerate the setting (gelation of casein) of milk protein in instant puddings and cheesecakes.

Potatoes will discolor by three mechanisms:

(1) browning occurs via polyphenoloxidase, which is initiated when the potato surface is exposed to air;

(2) Maillard browning is the result of amino acid and reducing sugar interaction when heated;

and (3) blackening of the cut potato surface is the oxidation of o‐diphenolic compounds in the presence of iron. Commercially prepared French fries are par‐cooked and frozen and, as such, are particularly prone to blackening after the heat treatment.

Dilute solutions (0.9–1.2%) of SAPP at 140–160 °F are sprayed on the potatoes in order to sequester the iron and prevent the after‐cook blackening.

Phosphoric acid is the acidulant and a flavorant used in colas and root beer at levels of 0.05% and 0.01%, respectively. Tricalcium phosphate (0.1–0.2%) was the preferred calcium source in fortified orange juice and it also modestly increased viscosity due to the interaction of calcium and pectic acid.

In dry beverage mixes, MCP may be used as a nonhygroscopic acidulant and partial replacement for citric acid while TCP may function as an anticaking and clouding agent. In noncarbonated beverages, such as fruit drinks and canned teas, SHMP may be added to sequester minerals essential to acid‐tolerant yeasts.

If you want to join us to be the distribution or partner of our factory for food additives, such as dietary fiber and phosphates products, please contact us at info@okchem.com, or directly check online to make the application.