As PBAT needs to be degraded in composting environment, its downstream includes waste classification and recycling and degradation treatment industry.

To produce 1 ton PBAT, 0.4 ton PTA, 0.43 ton BDO and 0.35 ton AA are needed.In the production cost of PBAT, raw material cost accounts for about 72%, followed by unit equipment depreciation cost, and the third is labor cost. 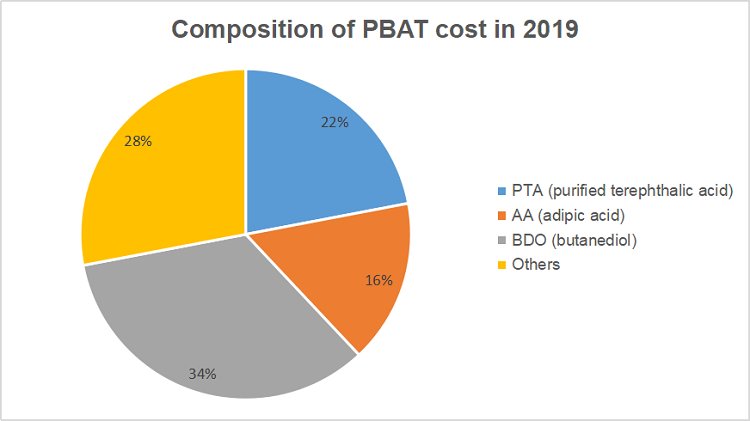 PTA faces overcapacity with large scale refining and chemical enterprises are put into operation one after another.

Purified terephthalic acid (PTA) is a kind of purified naphtha to obtain p-xylene (PX). Under the action of catalyst, PTA is obtained by oxidation, hydrofining, crystallization, drying and other steps. At present, China's PTA production capacity is relatively high. In 2020, the production capacity and output will be 56.96 million tons and 49.38 million tons respectively, with a year-on-year growth of 17.3% and 10.3% respectively.

The downstream products of PTA are mainly used for:

With the continuous production of large-scale refining and chemical enterprises, the current PTA expansion capacity of each enterprise has reached 33 million tons / year, about 60% more than the current capacity. With this part of production capacity gradually put into production in the next three years, PTA may enter a period of overcapacity.

The plastic ban polices are good for the PTA market. The proportion of PBAT raw materials in the field of degradable plastics is 24%. It is roughly estimated that 600000 tons of 2.5 million tons of substitutable materials will come from PBAT in 2025. The demand for PTA is estimated based on the consumption of 0.48 tons of PTA for 1 ton of PBAT. From the data analysis results, the popularity of degradable plastics has little impact on the demand of PTA.

It can be seen that the fluctuation of PTA market is not completely affected by the market demand of degradable plastics. The continuous strength of PTA market is mainly driven by the cost side.

1,4-butanediol (BDO) is a colorless or yellowish oily liquid. Its downstream applications include PTMEG, PBT, γ - butyrolactone, etc. The respective consumption proportions in 2019 were 54%, 27% and 13% respectively. China's BDO capacity has been in a state of surplus for a long time. The national BDO capacity were expected to reach 2.16 million tons / year, with an average annual compound growth rate of 6.1%. However, the actual operating rate in 2020 is only 57%, which has decreased by 14.17 PCT compared with that in 2016.

In addition, the capacity of BDO under construction and proposed in the future is more than 1 million tons, and the plant tends to be large-scale. However, if the proposed capacity is put into operation, the most intuitive consumption for BDO will reach 3.1 million tons, which is far from enough for the current BDO capacity supply. Therefore, the new capacity of BDO will be increased, and most of the enterprises will expand the existing capacity, or seek supporting facilities in the industrial chain , self-sufficiency.

According to the quotation of the business association, the domestic BDO market continued to rise, and the price soared. The production price of BDO has risen from 11675 yuan in November last year to about 15500 yuan in February this year. Prices rose 18.67% month on month and 57.71% year on year.

AA operating rate is low for a long time, PBAT and nylon are expected to ease the oversupply situation

Adipic acid (AA) is an important organic dibasic acid with carboxyl group. From 2016 to 2020, China's AA production capacity will increase from 2.385 million tons / year to 2.71 million tons / year, with a four-year compound annual growth rate of 3.25%; in the same period, the operating rate will remain low for a long time, changing from 52.58% to 56.58%, and the situation that supply is far greater than demand has not been improved.

In terms of downstream applications, AA is mainly used in PU slurry, sole stock solution, other elastomers, PA66, etc., accounting for 41%, 23%, 16% and 12% respectively. As an emerging downstream, PBAT's demand outbreak is expected to alleviate the situation of AA oversupply; meanwhile, domestic adiponitrile breakthrough is imminent, and the rapid growth of nylon after 2022 may further drive AA demand.